Iran now has two programs run by separate institutions, the Islamic Revolutionary Guard Corps (IRGC) and the Aerospace Industries Organization, that produce large-diameter solid motors which could be used in ballistic missiles. This gives Iran the technological capacity to smash through its self-imposed 2,000-kilometer range limit at virtually any time it chooses.

For more than a decade, the Islamic Revolutionary Guard Corps (IRGC) space program had been operating almost entirely in secret, in contrast with Iran’s other, well-publicized space program run by the Iranian Space Agency. Then, in April 2020, the IRGC “super project” made its public debut with the successful launch of the Qased space-launch vehicle and the placement of a military satellite into low-earth orbit.[1]

A few days later, the commander of the IRGC Aerospace Force, Amir Ali Hajizadeh, made clear that the launch of the Qased was just a prelude. As he explained, the rocket had relied on a tried-and-true liquid-fueled first stage (borrowed from the Ghadr missile) for its inaugural launch, both to cut costs and to reduce the risk of failure. Doing so allowed the IRGC’s engineers to focus on the newly-developed second and third stages. But future versions of the rocket, he promised, would use solid propellant for the first stage.[2]

The unveiling of the Zuljanah in February 2021 seemed at first to be the fulfillment of Hajizadeh’s promise:[3] a space-launch vehicle that used a solid-fueled first stage.[4] But the Zuljanah, it turned out, was not an IRGC project. It was developed by the Aerospace Industries Organization (AIO) for the Iranian Space Agency. The AIO had beaten the IRGC to the punch. 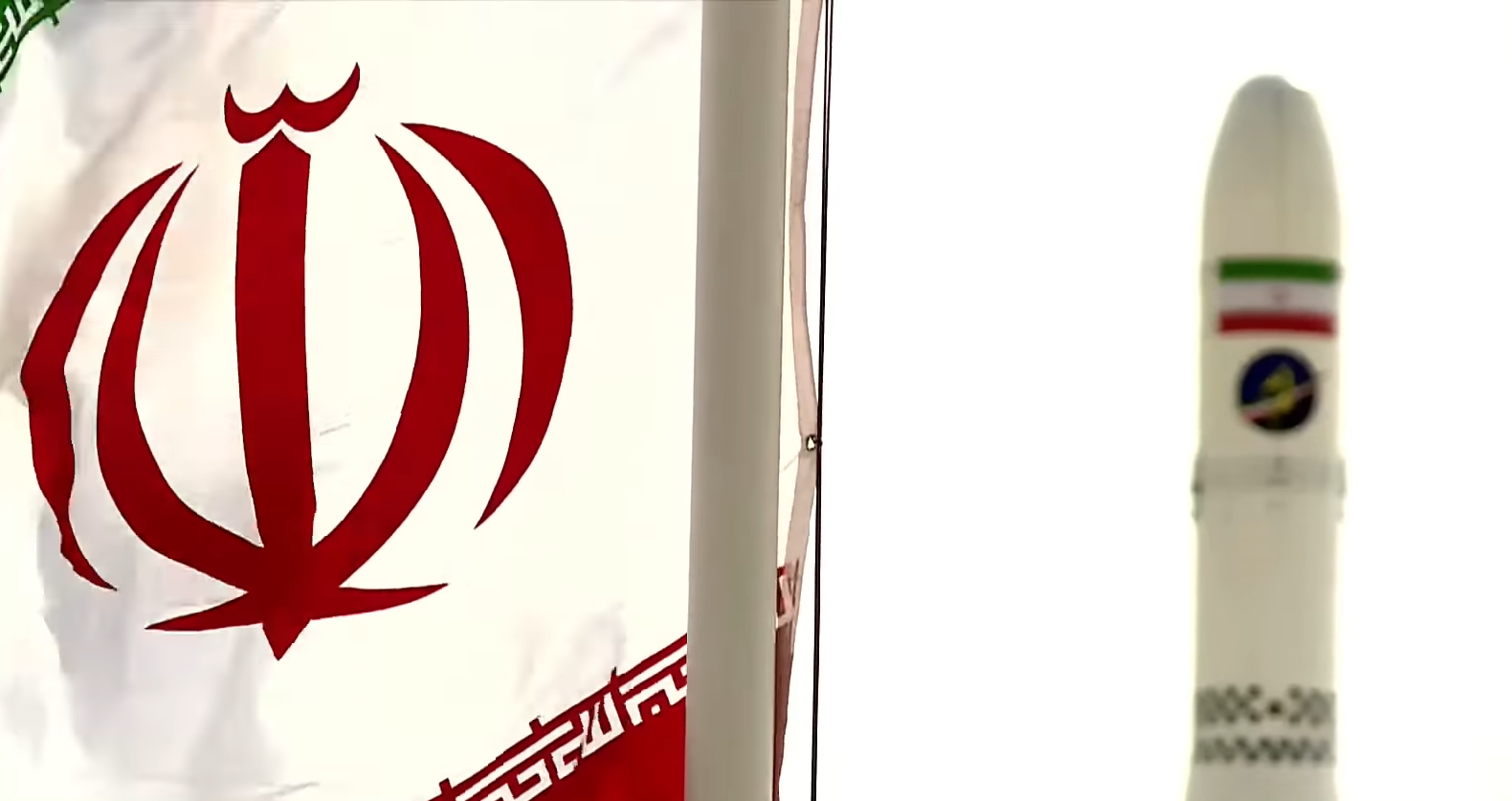 The IRGC’s all-solid rocket, the Ghaem-100, finally arrived in November 2022 and is superior in some ways to the Zuljanah.[5] More worryingly, it will probably serve as the basis for a series of larger, even more capable rockets. And once Iran decides to throw off its self-imposed limit of only deploying missiles with maximum ranges of 2,000 kilometers or less, the Ghaem-100 will be a prime candidate for adaptation into a ballistic missile.

In terms of design, the top half of the Ghaem-100 follows the same blueprint as the Qased. Both rockets use the solid-fueled Salman motor as a second stage and a smaller, unidentified solid motor as a third.[6]

But the Ghaem-100’s first stage motor, called Raafe, is a substantial improvement over the Qased’s liquid-fueled first stage. The latter comes from the Ghadr missile (which is in turn based on the North Korean Hwasong-7) and provides roughly 27 tons of thrust.[7] The Raafe motor, only a bit heavier, is reported to offer more than double that, or 68 tons of thrust.[8] The result is that, altogether, the Ghaem-100 has close to the same total mass as the Qased but can place double the payload into low-earth orbit (about 80 kilograms).[9]

As their exhaust plumes indicate, the Qased (left) uses a low-performance liquid-fueled first stage whereas the Ghaem-100 (right) uses a higher-performance solid-fueled one. (Credit: IRIB broadcasts via YouTube.)

Because of this improvement, if it were ever converted to a ballistic missile, the Ghaem-100 could likely reach ranges substantially longer than the 2,200 kilometers estimated for a converted Qased,[10] assuming a 1,000-kilogram payload. However, it would probably still not be capable of reaching intercontinental ranges of 5,500 km or greater.

The Ghaem-100 compares favorably with the Iranian Space Agency’s Zuljanah in many ways as well. 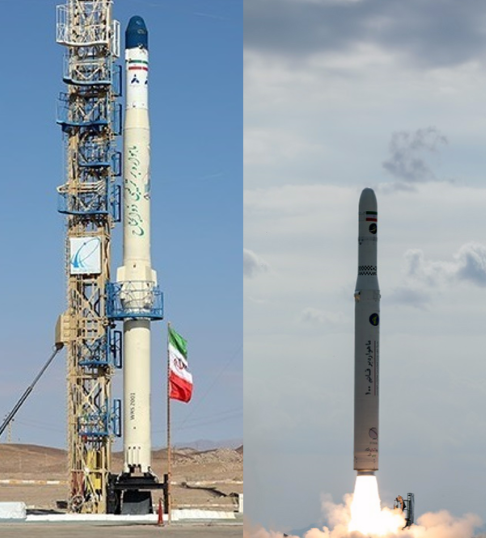 The Zuljanah (left) is larger than the Ghaem-100 (right) but lacks some of the latter’s advanced technologies. The images above are of roughly equal scale. (Credits: Tasnim News Agency [left] and Twitter User MESHKAT [right])

The Zuljanah’s first stage has a larger diameter (1.5 meters) and provides a bit more overall thrust than the Ghaem-100’s first stage,[11] which has a diameter closer to 1.3 meters. But the Raafe uses more advanced technologies. For example, it has a flexible nozzle for steering, whereas the Zuljanah uses jet vanes. Because jet vanes operate by deflecting the motor’s exhaust, they rob the rocket of a few percentage points of its overall thrust. A flexible nozzle has no such drawback. Raafe also appears to have a filament-wound carbon composite casing, another technological advance that offers weight savings compared to Zuljanah’s apparent steel casing.

The Ghaem-100’s Raafe motor appears to have a filament-wound casing and has a moveable nozzle. (Photo credit: IMA Media via YouTube.)

And while the Zuljanah can carry a heavier payload to low-earth orbit (reportedly 220 kg[12]) than the Ghaem-100, this is largely a consequence of its vastly larger second stage, which is a duplicate of the first stage. Because it relies on older, outdated technologies, the Zuljanah may actually underperform (in payload-to-orbit terms) for a rocket of its size.

The Ghaem-100 and Zuljanah differ in their long-term prospects. The Iranian Space Agency’s plan calls for building the Sarir and Soroush,[13] liquid-propellant rockets that improve upon the Simorgh, as the next major steps. The solid-fueled Zuljanah does not fit easily within this five-to-ten-year plan, and its future is therefore somewhat unclear.

Liquid propellant is a natural choice for the Iranian Space Agency program. Liquid hydrogen, an advanced cryogenic fuel, is typically considered the most advantageous option for space-launch applications, and space programs around the world have come to rely on it (although solid rockets commonly appear as supplementary boosters attached to a liquid-fueled core stage). The Iranian Space Agency’s plan calls for the use of cryogenic propellants beginning with the second-generation of the Soroush, although work on that rocket will not begin for at least several more years. To date, there is little open-source evidence that the Iranian Space Agency has developed or acquired an engine capable of burning liquid hydrogen.[14]

The IRGC space program, on the other hand, appears committed to the further development of rockets with solid-fueled core stages. There is no available open-source evidence indicating that the IRGC has the institutional capacity or infrastructure to develop liquid-fueled space-launch vehicles. Further, in November, the head of the Space Command of the IRGC Aerospace Force, Ali Jafarabadi, pointed towards a Ghaem-105, -110, and -120 as the next steps for the IRGC program, suggesting these would broadly build on the all-solid Ghaem-100.[15] Although Jafarabadi did not specify its design, a Ghaem-105 might employ a Raafe motor for both the first and second stages, the same way Zuljanah does with its identical first and second stages.

The IRGC’s commitment to solid propellants forecasts the long-term intentions of the program, since a large solid-fueled space-launch vehicle could be more advantageously reconfigured into a useful missile than a large liquid-fueled one could. It is also notable that the IRGC has preferred to launch its Qased and Ghaem-100 space-launch vehicles from mobile erector launchers, a feature that is not particularly useful for space-launch applications but is tactically useful for missiles.

Although the IRGC space program may be a greater cause for concern, the broader takeaway is that Iran now has two programs run by separate institutions that can produce large-diameter solid motors which could be used in ballistic missiles. In other words, Iran has already built the technological capacity to smash through its self-imposed 2,000-kilometer range limit at virtually any time it chooses.

[1] Michael Elleman and Mahsa Rouhi, “The IRGC gets into the space-launch business,” International Institute for Strategic Studies, May 1, 2020, available at https://www.iiss.org/blogs/analysis/2020/05/iran-military-satellite-launch-irgc, accessed on December 5, 2022.

[4] And, as one expert pointed out, the name “Zuljanah” itself fit the pattern of IRGC-developed rockets. Fabian Hinz, “Iran’s Solid Propellant SLV Program is Alive and Kicking,” Arms Control Wonk, February 14, 2020, available at https://www.armscontrolwonk.com/archive/1208906/irans-solid-propellant-slv-program-is-alive-and-kicking, accessed on December 8, 2022.

[14] A January 2016 announcement by the U.S. Department of the Treasury alleged that Iranian missile technicians had traveled to North Korea to work on an “80-ton rocket booster” that was then under development by North Korea. The announcement fueled speculation that Iran had gained access the RD-250 liquid-fueled engine that has come to power North Korea’s intercontinental-range missiles. More recently, there have been two apparent static tests of a liquid-fueled engine carried out on the larger test stand at Iran’s Khojir missile production complex in recent months, one in late May 2022 and a second in September 2022. These tests have also fed speculation that Iran is developing or has acquired an advanced liquid-propellant engine such as the RD-250. However, it is impossible to infer any details about the design, size, or performance of the engine based purely on the available satellite imagery. In any case, while the RD-250 is more powerful than any liquid-fueled engines Iran is known to possess, it still uses storable propellants (UDMH and nitrogen tetroxide), not cryogenic propellants, which are what Iran’s Soroush-2 and later rockets are slated to use.