The Joint Comprehensive Plan of Action (JCPOA) with Iran entered a new phase last month when the European parties to the agreement triggered its dispute resolution mechanism. The move comes months after Iran began taking steps that violate the JCPOA's nuclear restrictions. Iran announced the fifth and apparently final step on January 5, stating that it would no longer observe any "limitations in the number of centrifuges" in operation.[1] This was a step too far for France, Germany, and the United Kingdom (the European parties to the agreement, or E3), which had until then focused on coaxing Iran back into compliance. Cumulatively, the actions taken by Iran since last July were considered by the E3 to have "increasingly severe and non-reversible proliferation implications."[2]

As a result, the Europeans were "left with no choice" but to refer Iran's noncompliance to the JCPOA's Joint Commission, using a mechanism in the agreement aimed at resolving disputes. In a January 14 joint statement announcing the decision, however, the E3 made clear that their action in no way indicates a decision to join "a campaign to implement maximum pressure against Iran."[3] Their statement reiterated a commitment to preserving the JCPOA, a desire to facilitate Iranian exports through the Instrument in Support of Trade Exchanges (INSTEX), and continued "regret and concern" about the U.S. decision to withdraw from the agreement and re-impose sanctions. The statement closed with a warning: "Given recent events, it is all the more important that we do not add a nuclear proliferation crisis to the current escalation threatening the whole region."

Consistent with this measured approach, EU High Representative Josep Borrell announced on January 24 that the Joint Commission would "pursue expert-level discussions" about the dispute beyond the initial 15-day period set forth in the agreement, "due to the complexity of the issues involved."[4] The agreement allows this period to be extended by consensus of the parties, and the E3 has an interest in doing so. If the parties fail to resolve the dispute and Iran's noncompliance is found to constitute "significant non-performance," the issue could be sent to the U.N. Security Council. Any one party to the agreement may provoke this action. At the Security Council, the United States could weigh-in and force the re-imposition – or "snapback" – of all previous U.N. sanctions, an outcome the E3 would like to avoid.

By maintaining a balancing act within the first step of the dispute resolution process for now, the E3 may be able to exert some punitive pressure on Iran without upending the agreement. However, consensus among the E3 countries may weaken over time. If even one of the three countries finds Iran's continued violations sufficiently flagrant to warrant the involvement of the Security Council, that country may on its own notify the Council.

The dispute resolution mechanism is set forth in paragraphs 36 and 37 of the JCPOA, representing only two paragraphs in an agreement that runs over 150 pages.

Who pulled the trigger first?

Iran contends that it triggered the dispute resolution mechanism in response to the U.S. withdrawal from the JCPOA and the subsequent re-imposition of U.S. sanctions in 2018.[5] Iran further contends that the U.S. failure to maintain sanctions relief constitutes "significant non-performance" under the agreement and allows Iran "to cease performing its commitments under this JCPOA in whole or in part.”[6] In support of its claim, Iran cites communications by President Hassan Rouhani to European leaders as well as a number of meetings among deputy foreign ministers and foreign ministers of the remaining parties between May 2018 and May 2019.[7]

The E3 counter that Iran never sought to resolve the dispute using the JCPOA's formal channels and therefore has no grounds to cease implementing the agreement's nuclear restrictions.[8] Rather, the E3 consider their January 14 announcement to mark the first time that the JCPOA's dispute resolution mechanism has been triggered.

The text of the agreement appears to support the E3 position: a party first must seek to resolve the dispute through the formal process before ceasing to carry out its commitments. Paragraph 36 of the JCPOA authorizes any one party to trigger the dispute resolution mechanism if it believes that another party is not meeting its commitments under the agreement. This prompts the JCPOA's Joint Commission to convene with the aim of resolving the issue. If an issue deemed to constitute "significant non-performance" remains unresolved, the complaining party "could treat the unresolved issue as grounds to cease performing its commitments under this JCPOA in whole or in part.”[9]

The process itself was designed to address violations by Iran rather than Iranian complaints of non-performance by other parties. Notably, the ultimate outcome of an unresolved dispute is discussion at the U.N. Security Council and, assuming an absence of consensus, the re-imposition of all past U.N. sanctions. Hardly an ideal outcome for Iran. The mechanism was designed by U.S. and European negotiators to automatically re-instate past sanctions without protracted debate in the Security Council, where Russia and China could prevent speedy action.

Indeed, China and Russia have expressed some understanding about what a Chinese foreign ministry spokesperson called "Iran's reduction in compliance."[10] This reduction is "retaliatory in nature," according to the Russian foreign ministry – a response to the U.S. withdrawal from the JCPOA.[11] Both countries criticized the E3 decision to trigger the dispute resolution mechanism as needlessly escalatory. Russia appealed to the E3 not to "aggravate the situation" and China called for all parties "to resolve differences regarding compliance through dialogue and consultation under the JCPOA Joint Commission" – both clearly appealing for the E3 not to move the issue to the Security Council.

If one party to the agreement deems another to be in violation of its commitments, the complaining party may take the steps described below in an effort to resolve the dispute. The E3 chose to trigger this dispute resolution mechanism together. However, the internal E3 consensus on extending discussion could fray if one country deems Iran's actions sufficiently flagrant to warrant more punitive measures. This country, on its own, should be able to move the issue through the following steps and ultimately to the U.N. Security Council. 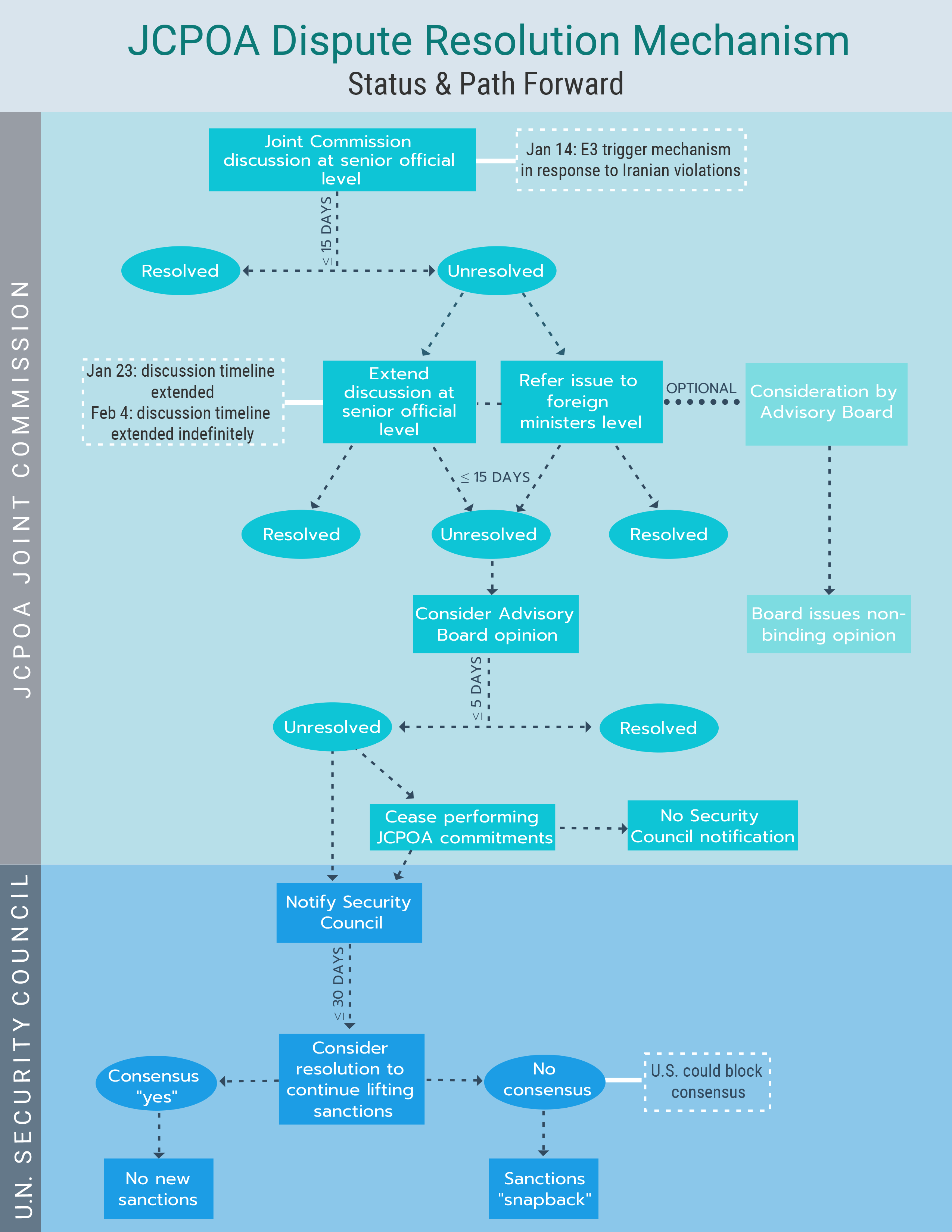 [8] Ministry for Europe and Foreign Affairs, “Joint statement by the Foreign Ministers of France, Germany and the United Kingdom on the Joint Comprehensive Plan of Action.” The Republic of France, January 14, 2020. https://nz.ambafrance.org/Joint-statement-by-the-Foreign-Ministers-of-France-Germany-and-the-United. Accessed 31 Jan. 2020.

[11] Ministry of Foreign Affairs, “Comment by the Information and Press Department on the decision of the United Kingdom, Germany and France to formalize the dispute resolution mechanism under the Joint Comprehensive Plan of Action on the Iranian nuclear programme.” The Russian Federation, January 14, 2020. https://www.mid.ru/en/foreign_policy/news/-/asset_publisher/cKNonkJE02Bw/content/id/3994344. Accessed 31 Jan. 2020.