This month’s newsletter includes a report on U.S. laws that restrict trade with and investment in Iran and punish proliferation. The report provides a chronology of U.S. sanctions over four decades, including actions taken by the U.S. Government since it withdrew from the Joint Comprehensive Plan of Action (JCPOA) and began a policy of “maximum pressure” on Iran. This policy has made it difficult for foreign entities to do business with Iran without exposing themselves to U.S. secondary sanctions. The newsletter also features an updated analysis of why companies across the world are cutting ties with Iran.

In addition, the newsletter includes documents from the Iran Watch library about the U.S. effort at the United Nations to extend an arms embargo on Iran and a subsequent move to re-impose all U.N. sanctions, as well as profiles of research institutes tied to Iran’s nuclear weapon-related work, and news about a U.S. case against individuals who moved U.S. currency to Iran at the behest of Iranian Supreme Leader Ali Khamenei, Iran’s decision to move advanced centrifuges to Natanz, and more.

When the United States withdrew from the JCPOA, it re-imposed earlier sanctions related to Iran’s nuclear program that had been suspended under the agreement, and then set out to add more. The aim of the U.S. “maximum pressure” policy is to compel Tehran to negotiate a new agreement with stricter limits on its nuclear and missile programs, as well as constraints on its regional malign activities and support for terrorism. This report provides a chronological overview of the U.S. laws that restrict most trade and investment with Iran by U.S. firms. These laws also make it increasingly difficult for foreign entities to do business with Iran without exposing themselves to U.S. secondary sanctions. (Image courtesy of the Executive Office of the President of the United States.)

Why Companies around the World are Reversing Course on Iran Business

Two years ago, the United States re-imposed powerful sanctions on Iran's banking, energy, and shipping sectors – and on the governments and companies still engaging with those sectors. Faced with the threat of these sanctions, and despite ongoing E.U. efforts to counter their impact, companies around the world have been abandoning trade and investment with Iran that they had initiated following the nuclear agreement.

Organization of Defensive Innovation and Research (SPND)
A research institute under the Ministry of Defense Armed Forces Logistics (MODAFL) that has been associated with “possible military dimensions of the Iranian nuclear program,” according to the IAEA.

Shahid Karimi Group
An SPND subsidiary that works on missile and explosives-related projects; sanctioned by the United States in 2019 for its work on behalf of SPND.

Sa'id Borji
An explosives and metals expert for Shahid Karimi Group; has assisted SPND’s efforts to procure equipment used for containing explosions, according to the U.S. Department of the Treasury. 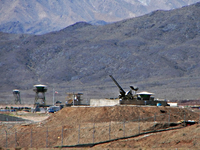 August 13: According to a document from the International Atomic Energy Agency (IAEA), Iran is moving advanced centrifuges from a pilot facility to Hall B of the Natanz uranium enrichment complex. Iran had installed piping needed to accommodate these new centrifuges; three cascades of 164-machines each will be installed, according to the IAEA document. The move violates Iran's obligations under the Joint Comprehensive Plan of Action (JCPOA). Iran pledged to cooperate with the IAEA inspection but asked the Agency to describe the scope of its inquiry. (Hamed Saber, CC BY 2.0)

August 13: The United States seized the cargo of four Venezuela-bound oil tankers alleged to be carrying Iranian petroleum after U.S. prosecutors filed a lawsuit in July seeking permission to intercept the ships. U.S. officials rerouted the ships, the Luna, Pandi, Bering, and Bella, to Houston. The four ships had been traveling with a flotilla escorted by an Iranian naval vessel but split off after U.S. authorities contacted the owners of the vessels. U.S. prosecutors allege that an Iranian businessman tied to the Islamic Revolutionary Guard Corps (IRGC) had arranged the shipments of oil to Venezuela through a series of shell companies. The four ships have ties to companies operated by the Greek businessmen Giorgios and Marios Gialozoglou. Some of these vessels had conducted ship-to-ship transfers, and one of the ships faced allegations of delivering oil to Iranian-backed Houthi rebels in Yemen. In a separate case, a U.S. judge awarded the United States the title to the Grace 1, a ship that U.S. authorities accused of delivering Iranian oil to Syria in 2019.

U.S. Charges 3 in Scheme to Move U.S. Currency to Iran

August 20: The U.S. Justice Department charged Ali Chawla, a Pakistani national in the Iranian city of Qom; Asim Naqvi, a U.S. national in Houston; and Muzzamil Zaidi, a U.S. national in Qom, with violating the International Emergency Economic Powers Act by moving U.S. currency to Iran at the behest of Iranian Supreme Leader Ali Khamenei. U.S. officials alleged that Chawla, Zaidi, and other members of the group Islamic Pulse received permission from Khamenei to collect a religious tax on his behalf, sending half the money to Iran and half to Yemen. This operation continued after the United States imposed sanctions on Khamenei in 2019. According to the Justice Department, all three defendants “have considerable operational links” to the Islamic Revolutionary Guard Corps (IRGC). (Image courtesy of the Central Bank of Iran.)