In a live television presentation on April 30, Israeli Prime Minister Benjamin Netanyahu unveiled information about Iran's nuclear weapons program that had been seized by Israeli agents in a January raid on a storage building in Tehran’s Shorabad District. The information, which the Prime Minister called "a secret atomic archive," is comprised of 55,000 pages and 55,000 files on 183 CDs. The archive was moved to an "innocent-looking compound" in 2017, according to Netanyahu. 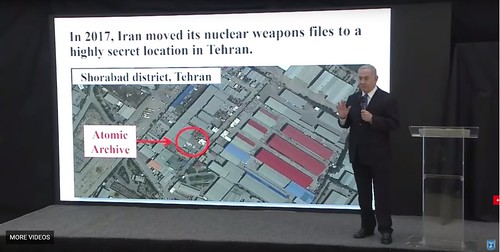 The captured blueprints, spreadsheets, charts, photos, and videos – apparently official Iranian documents – provide new detail about Iran’s Project Amad, a coordinated nuclear weapon program that ran between 1999 and 2003. The archive, Netanyahu noted, demonstrates that Iran continues to lie about its nuclear weapon intentions despite the 2015 nuclear deal, and that it is "secretly storing Project Amad material to use at a time of its choice to develop nuclear weapons." After 2003, according to the Prime Minister, Iran sought to preserve its weaponzation gains. It divided its nuclear program between covert and overt activities and retained a team, led by Mohsen Fakhrizadeh, to continue work on weaponization through an organization controlled by Iran's military, called SPND.

Netanyahu noted that the archive had been shared with the United States and promised to share the files with additional governments and the International Atomic Energy Agency (IAEA) in the coming days.

Initial Reaction
In a statement on April 30, U.S. Secretary of State Mike Pompeo said that the archive is assessed to be authentic and that U.S. nonproliferation analysts and intelligence officials are analyzing and translating the documents -- a process that "will continue for many months." However, Pompeo stated, the archive proves that Iran "had a secret nuclear weapons program for years" and that Iran "lied to the IAEA repeatedly" about this program. Pompeo concluded that the United States is “assessing what the discovery of Iran’s secret nuclear files means for the future of the JCPOA” ahead of the President's May 12 deadline to fix the the deal.

The European Union responded that the atomic archive has "not put into question Iran’s compliance with the JCPOA." The International Atomic Agency indirectly referenced Netanyahu’s presentation, saying that Iran did have a structure in place before 2003 to develop a nuclear explosive device, but that there are "no indications of activities in Iran relevant to the development of a nuclear explosive device after 2009."

Previous Reports
Prime Minister Netanyahu's presentation highlighted just a few documents from among the tens of thousands seized in the raid. While the archive may well contain new information about Iran's weaponization work, much of the work described by the Prime Minister was previously known.

Two IAEA reports, one published in November 2011 and another published in December 2015 describe in detail the results of the Agency's investigation into "possible military dimensions" of Iran's nuclear program. The 2015 report concludes that Iran had a "coordinated" program to develop a nuclear weapon through the end of 2003 and that some of the work on nuclear weapons continued into 2009. Specifically, the IAEA found that Iran developed several components of a nuclear weapon and undertook related research and testing. A previous Iran Watch Policy Brief reviews these findings in detail: Questions Remain in "Final" Report on Iran’s Alleged Weapons Work.