On January 28 and again on February 25, 2022, the British Royal Navy ship HMS Montrose intercepted small boats carrying sophisticated weaponry in international waters south of Iran. After seizing the weapons and returning them to the United Kingdom for analysis, the Royal Navy announced that the shipments included engines for the Iranian “351” land-attack cruise missile and several complete kits for Iranian “358” surface-to-air missiles.

The available evidence strongly suggests that the components were produced in Iran and that Iran bears responsibility for the illicit shipments, which according to the Royal Navy violated the U.N. Security Council resolution establishing an arms embargo on Yemen’s Houthi rebels—a group that Iran supports. But a deeper investigation also points to companies based in several other countries—as well as weaknesses in national export control systems—that enabled Iran to acquire the components in the first place.

“351” is the U.S. designation for a ground-launched land-attack cruise missile that the Houthis call the Quds. The Houthis first displayed the missile at an exhibition in Yemen in July 2019, where they dubiously claimed to have developed it indigenously. By that time, the Houthis had already used the Quds-1 in two attacks against Saudi civilian targets, and they have deployed it numerous times since then, including in the September 2019 attack on Saudi Aramco facilities. That attack was claimed by the Houthis but possibly was launched from Iran.

The Quds cruise missile on display in Yemen in July 2019. (Credit: Letter dated 27 January 2020 from the Panel of Experts on Yemen addressed to the President of the Security Council, p. 24)

The engine used in the “351” missile[1] is an unlicensed copy of the TJ100 turbojet engine produced by a Czech company called PBS Velká Bíteš. In 2019, the U.N. Panel of Experts on Yemen examined debris from at least six distinct Quds missiles used in the Saudi Aramco attack and concluded that the engines of those missiles were identical in design to the TJ100. But while two of the recovered missiles contained original parts produced by PBS Velká Bíteš, the others apparently consisted entirely of reverse-engineered parts.

Left: The PBS TJ100 turbojet engine. Right: Debris of a turbojet engine recovered in Saudi Arabia in 2019, which the UN Panel of Experts concluded was identical in design to the TJ100. (Credit: Wikimedia Commons, Letter dated 27 January 2020 from the Panel of Experts on Yemen addressed to the President of the Security Council, p. 96.)

This clear Iranian connection leaves open the question of how Iran first acquired the TJ100 engine to be able to reverse engineer it. While the engine is commercially available and has been exported to customers in more than 15 countries, PBS Velká Bíteš claimed in 2019 that it had never exported engines to Iran or its allies.

It is possible that Iran obtained the TJ100 through a company in the United Arab Emirates (U.A.E.). A leaked classified cable from the United States alleged that U.A.E.-based Noor Aerospace Technologies was working to supply Iran Aircraft Manufacturing Industries (HESA) with the engine in late 2007 or early 2008 by falsifying export documents.

A more likely, but not mutually exclusive, scenario is that Iran obtained the TJ100 from a Hong Kong-based firm. The U.N. Panel of Experts traced the origin of four original PBS-produced parts recovered from the debris of missiles used in 2019. The Panel found that these parts came from engines that PBS produced in 2010 and exported to China Feixiang Aviation Science Technology Ltd. in Hong Kong.

“358” is the U.S. designation for a surface-to-air missile that uses a turbojet engine once airborne. The missile has a limited cruising speed and is primarily a threat to slow-moving aircraft such as helicopters or loitering drones. 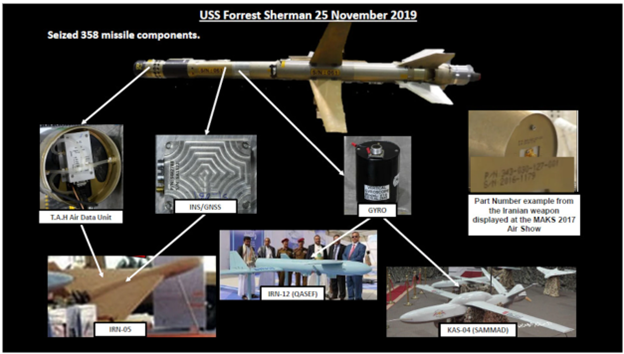 The “358” has never been displayed in Iran and there is no evidence that it is in service there, but there is considerable evidence that it is produced there—or at least many of its major subcomponents are. First, as mentioned above, “358” missiles have been interdicted in international waters several times alongside other Iran-produced weapons. Moreover, according to U.S. Central Command, the system shares components used in other Iranian systems, such as its vertical gyroscope and its inertial navigation system/Global Navigation Satellite System (INS/GNSS). Finally, “358” missiles seized by the United States had standardized part number markings consistent with those observed on other Iranian weapons displayed at the MAKS 2017 Air Show in Russia.

Unlike the engine used in the “351,” the turbojet used in the “358” is not a reverse-engineered copy produced in Iran. Rather, it is a commercially available model called the Titan, manufactured by AMT Netherlands. Using the serial numbers on engines seized by the U.S. Navy in November 2019 and February 2020, the U.N. Panel of Experts on Yemen was able to trace the chain of custody for the engines. AMT originally shipped them from the Netherlands to two companies in Hong Kong, HSJ Electronics and Vista Automation & Communication. Both companies are owned by the same individual, Zhang Hongfeng, and at least one has an Iran-based employee. Although the export licenses issued by the Netherlands states that the engines should not be sold or re-exported, that stipulation apparently went unheeded.

The Royal Navy’s seizures in early 2022 add further evidence in support of the allegation that Iran continues to supply weapons to the Houthis in violation of U.N. Security Council resolution 2216. Both types of missiles, the “351” and the “358,” have been confiscated at sea before. On November 25, 2019, the U.S. Navy intercepted a dhow in the Arabian Sea carrying not only “351” and “358” missile components, but also anti-tank missiles, thermal optical weapon sights, and one set of components for the Iranian C802 (Noor) anti-ship cruise missile. In a similar operation on February 9, 2020, the U.S. Navy also seized a batch of “358” missiles along with other weapons.

The interdictions also illustrate the medium-term consequences of technology diversion from the West to Iran and highlight the importance of know-your-customer due diligence practices, particularly in regard to destinations such as Hong Kong and the U.A.E. that have a high risk of transshipment. Once an item enters the possession of the wrong company in such a jurisdiction, the manufacturer can no longer ensure that it will not be proliferated to militant groups or used for terrorism, as the TJ100 and the Titan engines have been.

[1] The Quds-2, which may be an extended-range variant of the Quds-1 and which the Houthis first displayed in March 2021, uses the same engine.

Trigger Warning: The Consequences of Snapping Back Sanctions on Iran
January 31, 2023
Stuck in the Past: The U.N.’s 2231 List
January 31, 2022
Why Companies around the World are Reversing Course on Iran Business
May 18, 2021
END_OF_DOCUMENT_TOKEN_TO_BE_REPLACED