This month's newsletter features an update to a timeline tracking Iran’s nuclear progress. New entries cover the appointment of a U.N.-sanctioned individual as head of the Atomic Energy Organization of Iran (AEOI), a monitoring dispute between Iran and the International Atomic Energy Agency (IAEA) over a centrifuge plant, and Iran’s use of advanced centrifuges to enrich uranium, as well as proposals to revive the Joint Comprehensive Plan of Action (JCPOA).

The newsletter also features profiles of entities in a ballistic missile procurement network, as well as news about IAEA monitoring in Iran, increasing competition between Iran and Russia for a share of China’s oil market, and the assassination of a senior IRGC Qods Force officer in Tehran. Documents from the Iran Watch library include official statements relating to security in the Persian Gulf, readouts of Iranian diplomatic activity, and Congressional reports and testimony regarding U.S. policy toward Iran.

In August 2021, Mohammad Eslami, who is sanctioned by the United Nations for his previous positions in Iran’s military industries, took over as head of the AEOI. During his tenure, Iran has forged ahead with uranium enrichment and the deployment of advanced centrifuges while continuing to restrict the IAEA’s ability to monitor this work. The AEOI also closed a damaged centrifuge component manufacturing plant and moved its equipment to an underground facility in Natanz. Meanwhile, negotiations between Iran and the P5+1 to revive the JCPOA struggled to produce results. (Image via Tasnim.)

In March, the U.S. Treasury Department sanctioned Iranian companies that have procured items from China related to ballistic missile propellant.

Mohammad Ali Hosseini
Arranged for the purchase and shipment of processing machines used in the production of solid missile propellant, from China-based suppliers; has met and traveled with senior officials of the Islamic Revolutionary Guard Corps (IRGC). 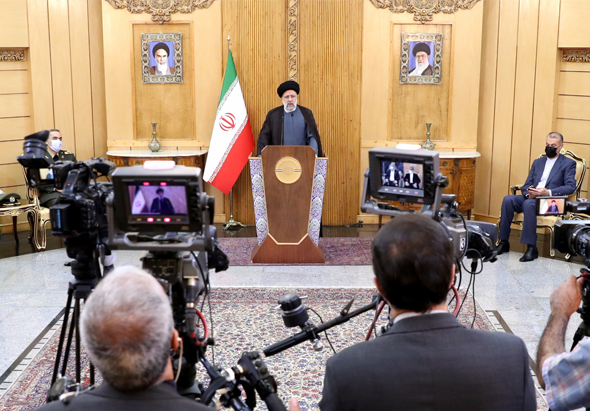 May 22, 2022: Two unidentified gunmen killed IRGC Colonel Hassan Sayyad Khodaei outside his Tehran home on May 22. Khodaei's role within the IRGC is unclear, but state-affiliated media called him a "defender of the shrine," language that usually refers to Qods Force units that fight against the Islamic State in Syria and Iraq. The IRGC said "global arrogance," a term used often in Iran to refer to the United States and Israel, was behind the killing. The IRGC separately announced that it had uncovered an Israeli spy cell operating in the country. (Image via Tasnim.)

May 19, 2022: Iranian oil exports to China fell by approximately 200,000 barrels per day from March to April, according to industry consultants, likely due to a higher volume of competing Russian oil exports to Asia. China, the main destination of Iranian oil exports, began buying heavily discounted Russian oil at triple its previous rate, after Western countries imposed sanctions on Russia. Russian crude oil is usually cheaper to refine than Iranian crude. Approximately 20 Iranian tankers carrying nearly 40 million barrels of oil have been left anchored near Singapore searching for buyers, according to shipping data and estimates by the analytics company Kpler.

IAEA Warns That Iran Not Forthcoming On Past Nuclear Activities | Reuters

May 10, 2022: IAEA Director General Rafael Grossi told EU lawmakers that Iran has not been forthcoming about the presence of nuclear material at three undeclared sites. Iran and the IAEA agreed to work to resolve outstanding questions about the sites in March, and Tehran had agreed to provide answers to the Agency before the IAEA Board of Governors meeting in June. Grossi said that the situation "does not look very good" and that finalizing a nuclear deal would be difficult without satisfactory information about the sites.

Iran Moves Centrifuge-Parts Workshop Underground At Natanz, IAEA Says | Reuters
April 28, 2022: Iran has set up a new centrifuge component manufacturing plant in an underground part of its Natanz nuclear facility, according to the International Atomic Energy Agency (IAEA). The plant's equipment was previously located at a site in Karaj that suffered an alleged sabotage attack last year; it is now present in the Natanz site's Fuel Enrichment Plant (FEP). The FEP had previously only been used for uranium enrichment.

The European Union and Gulf Cooperation Council (GCC) announced a new partnership, an Iranian spy satellite photographed a U.S. naval base in Bahrain, and the 5th Fleet commander spoke about security developments in the region.

Iranian diplomats traveled to Venezuela, hosted a Chinese delegation and spoke by phone with a U.N. envoy.

Executive agencies reported to Congress about Iran, and the ranking member of the House Foreign Affairs Committee wrote to the Biden administration about JCPOA negotiations.